“The food we eat and how we produce it determines the health of people and the planet, and we are currently getting this seriously wrong.”

While scientists continue to call for immediately phasing out fossil fuels across the global to avert climate catastrophe, a team of international experts on Thursday unveiled a proposal to address another major driver of the climate crisis: the world’s unhealthy and unsustainable food system.

“To be healthy, diets must have an appropriate calorie intake and consist of a variety of plant-based foods, low amounts of animal-based foods, unsaturated rather than saturated fats, and few refined grains, highly processed foods, and added sugars.”
—Dr. Walter Willett, Harvard University

“The food we eat and how we produce it determines the health of people and the planet, and we are currently getting this seriously wrong,” declared Tim Lang, a co-author of the EAT-Lancet Commission and professor at City, University of London. “We need a significant overhaul, changing the global food system on a scale not seen before in ways appropriate to each country’s circumstances.”

The commission brought together 37 experts in agriculture, environmental sustainability, human health, and political science from 16 countries. Over three years, they developed the “planetary health diet,” which aims to address the global food system’s devastating environmental impact as well as mass malnutrition.

Noting that more than eight hundred million people worldwide have insufficient food, while many more consume an unhealthy diet that contributes to premature death and disease,” co-lead commissioner Dr. Walter Willett of Harvard University said the “world’s diets must change dramatically” to reverse the damage that’s been done.

“To be healthy,” he explained, “diets must have an appropriate calorie intake and consist of a variety of plant-based foods, low amounts of animal-based foods, unsaturated rather than saturated fats, and few refined grains, highly processed foods, and added sugars.”

The #EATLancet Commission is here: Read how we can achieve planetary health diets for nearly 10 billion people by 2050. https://t.co/xpjsQ223t8#foodcanfixit @TheLancet pic.twitter.com/WVKqkoHgpV

“This is the first attempt to set universal scientific targets for the food system that apply to all people and the planet,” according to the final report, Food in the Anthropocene: Healthy Diets From Sustainable Food Systems (pdf).

The “Great Food Transformation” envisioned by the commission acknowledges that the world population is on track to reach an estimated 10 billion by 2050. The researchers considered current food production and consumption trends in terms of not only planet-warming emissions but also cropland and freshwater use, nitrogen and phosphorus cycling, and species extinction.

“Humanity now poses a threat to the stability of the planet,” co-lead commissioner Johan Rockström of the Stockholm Resilience Center told the Guardian. “[This requires] nothing less than a new global agricultural revolution.”

The report, published in The Lancet, lays out five key strategies for its proposed overhaul of global food norms:

Alongside its report, the commission put out a brief (pdf) identifying top takeaways and specific actions that individuals can take to help transform the global food system. Suggestions include buying more sustainably produced food, embracing plants as a source of protein, and slashing both meat consumption and food waste. 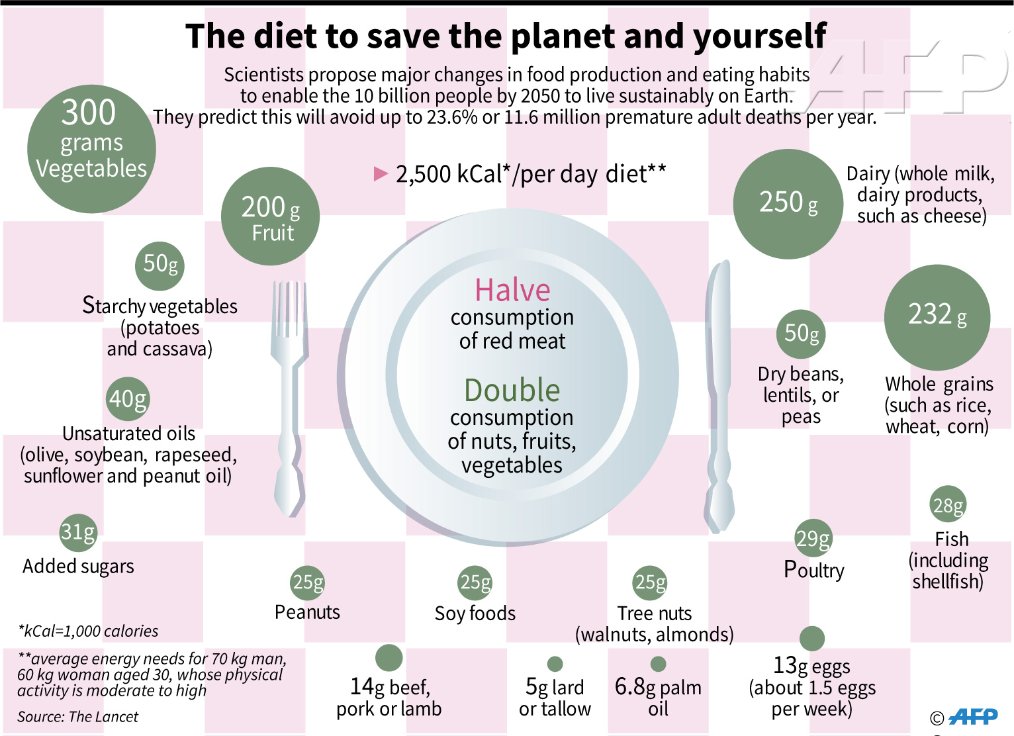 The unveiling of the planetary health diet follows a series of recent studies that have shown it is environmentally necessary for humans—particularly in the United States and Europe—to dramatically reduce red meat consumption. The commission estimates that shifting toward such a diet could save at least 11 million adult lives annually.

The commission’s report comes as the New England Journal of Medicine published a “grim analysis” on Thursday which warns that the World Health Organization’s conclusion from just five years ago that rising global temperatures over the next few decades will kill 250,000 people per year is a “conservative estimate.”

The @WHO predicts that 250,000 deaths yearly from 2030 to 2050 will be attributable to #climatechange. Reductions in greenhouse-gas emissions could have substantial health benefits — for example, reduced air pollution could lead to a lower risk of noncommunicable disease. "The food we eat and how we produce it determines the health of people and the planet, and we are currently getting this seriously wrong."