.
Home » Articles » Can Meaningful Change Be Brought About at The Ballot Box?

The results are in. Britain has spoken, and the verdict for progressives is a demoralizing one. The different paths on offer in this election were startling.

On one side, a party had a clear proposal to abolish university tuition fees, end rough sleeping within five years, provide a living wage of £10 an hour for over 16s, provide workers with a 10% stake in companies with over 250 employees, reduce the working week to 32 hours with no loss of pay, create a £250 billion Green Transformation Fund to help the country reach net zero carbon emissions by 2040, with most coming by 2030, bring railways, energy providers, water providers and the postal service into the public sector, reduce train fares by 33% and offer free rail travel for the under 16s, end the hereditary House of Lords and replace it with an elected senate, reduce the age of voting to 16, provide £3.2 billion more to schools than the Conservatives, and offer free broadband internet access to all.

On the other side was a party offering business as usual, with their only standout policies being a £100 billion investment in roads, an oven ready Brexit and tax cuts for all.

You might be asking “What’s wrong with business as usual?” Well, the Intergovernmental Panel on Climate Change (IPCC) stated in 2018 that we need to get our carbon emissions down by 45% by 2030, and this still only gives us a 66% chance of avoiding 1.5°C of warming. If temperatures rise above this level, we risk the deaths of hundreds of millions of people, the loss of most coral reefs, the extinction of countless species, and the possibility of a runaway climate change scenario which is no longer in our control.

Britain had a chance to elect a leader who has consistently supported minorities, consistently supported workers over corporations, consistently declined to raise money from corporations and consistently supported peace. They instead chose to elect a man who has called gay men “tank-topped bumboys”, likened same-sex marriage to bestiality, called Africans piccaninnies, claimed 68% of Malaysian students at British universities were trying to find husbands, referred to women wearing the niqab as letterboxes, and claimed African states would gain from the return of white colonial rule. His party also received £5.67 million in large donations, with money flying into the coffers from fossil fuel companies, private hospital owners and wealthy Russians in the run up to the election. Labour, on the other hand received just £218,500 with £123,000 of this coming from trade unions.

With this in mind, progressives around the world will be scratching their heads and asking why would people vote against their interests in this way? It would be naïve to not consider the appeal of an oven ready Brexit. Brits are increasingly tired of the Brexit situation. It has dragged on for more than three years, and many people just want it done. Johnson knew this, and his entire campaign was centered on the slogan ‘Get Brexit Done’. It was hardly mentioned at all that Brexit is going to go on for many years to come. The negotiations will only begin in January, and completing 759 separate treaties may take many years. Johnson’s campaign made it seem like Britain would leave the EU on January 1st, 2020. Many people will be shocked when they realise they can still enter the EU without having their passport stamped when they go to Europe for their summer holiday. 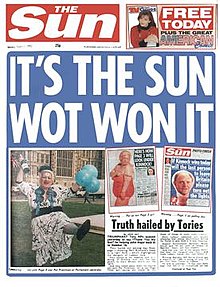 Another more salient reason for people voting against their interests is the billionaire owned media, especially the Rupert Murdoch owned Sun, and Lord Rothermere’s Daily Mail. The Sun in particular has a strangle hold on working class thought. Ever since 1979 when the paper stopped backing Labour to support Thatcher, the paper has supported the winning party at each and every election. Their manipulation was clandestine until the 1992 election, when the paper itself, on their front page declared, “It’s the Sun Wot Won It”. The only time the Labour party was backed by the Sun was when ‘New Labour’ pathetically moved to the center ground starting in 1997, simply to be in power. They abandoned the working class, and religiously sang from the same neo-liberal, trickle-down economics hymn book. The same had already happened in America under Clinton, and voters were left with two political carbon copies to choose from. It’s not surprising that people have largely given up on politics and believe all politicians to be in it for themselves.

Since becoming leader of the Labour party, the Sun and Daily Mail have accused Corbyn of being racist, anti-Semitic, a terrorist sympathizer, a hypocrite for kissing the queens hand in return for money, and working as a spy for Czechoslovakia.  These lies are then spread from person to person as if they are true. These lies are preposterous for ‘newspapers’ to be printing, because they are all demonstrably false. Unfortunately, the media know that the readers won’t fact check, and the worst that will happen is they will have to print an apology that they can bury on page 17 underneath their story titled, ‘My dog ate my wife’.

The only way to gain the backing of the billionaire press is to assure their owners that you will carry on business as usual. There is no room, and no support for any dissenting voices. Blair, Brown, Clinton and Obama were neo-liberals, as is every democratic nominee, except for Bernie Sanders. The billionaire owned media have no problem supporting either Labour or Conservative, Democrat or Republican, as long as they meet one single requirement, they must be neo-liberal. They must not upset the apple cart.

We know we must have systemic change for humanity to survive on this planet. We cannot continue business as usual, with a population fast approaching 10 billion and expect perpetual growth forever. But, can we really expect the billionaire owned media to allow us to democratically elect a politician that plans on reigning in their power and greed for the good of all life on our planet? We can be assured that they will do everything in their power to stop this from happening.

The time for hope at elections every four or five years is over. We don’t have time for incremental tweaks here and there when a centre left party is anointed by the status quo media. The only way to save life as we know it on Earth is to organize ourselves and take to the streets in peaceful civil disobedience. This has already begun. We are united under the banner of Extinction Rebellion, and we need you to help us force our governments around the world to act like we are in an emergency, because we are. The good news is that research from Harvard University shows that if we can mobilize just 3.5% of the population to take part in peaceful disobedience, we will be assured of success. No peaceful rebellion to garner active support from more than 3.5% of the population has failed since 1900.

One thought on “Can Meaningful Change Be Brought About at The Ballot Box?”