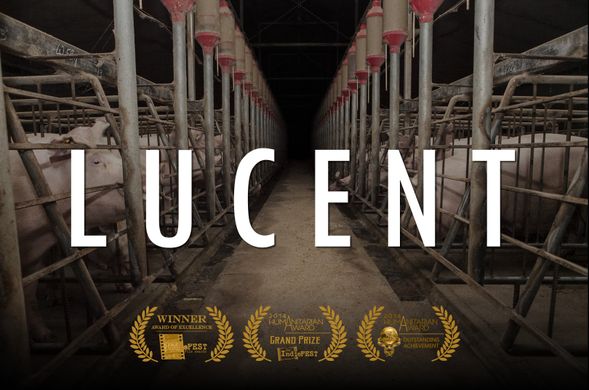 The mother pigs are rigidly confined within a cage so constrictive that it only allows for the faintest of single steps. Once a day, they are beaten upright by factory workers to ensure that paralysis doesn’t set in due to their lack of mobility. Their tight living quarters also inspire extreme mental anguish, producing an agitation so profound that many sows have resorted to furiously biting the bars that enslave them, perpetuating further injury upon themselves in the process.

They endure a constant cycle of impregnation, and due to malnourishment and lack of proper care, they are often forced to watch their babies die and decompose before them. Their bodies are streaked with the scars and open festers of neglect, and their screams echo and multiply down every corridor of these chambers of horror. These harrowing images mark the opening of Lucent, a shattering new documentary that sheds much-needed light on the unseemly environments and unethical practices of Australia’s pig farms and slaughterhouses. Featuring a wealth of never-before-seen surveillance and handheld footage captured by a devoted team of animal rights activists, the film reveals a culture of abuse that has remained hidden in the shadows for far too long.

We’re taken inside the operations of fifty assorted locations, including Riverlea, the largest slaughterhouse in the country, and Wally’s Piggery, the setting for some of the film’s most damning indictments. There, cameras capture pigs being savagely beaten with sledgehammers until rendered dead or unconscious, and serrated by knives at the neck, left struggling in the throes of slow death. These barbaric practices are far from isolated; in fact, the abundance of footage obtained by the filmmakers reveals that animal cruelty of this magnitude appears to be standard operating procedure.

By presenting unblinking visual evidence of these repugnant cruelties, Lucent offers a thoroughly convincing argument that profound change needs to take place within the pig farming industry and within our own consciousness. After all, pigs are self-aware animals with distinct personalities, and an intelligence that surpasses that of man’s best friend, the dog. Why shouldn’t they be afforded the same level of humane treatment?