1. The words and phrases below will appear in the text. Use the various Quizlet study modes to get used to the words. Enjoy!

2. Read the paragraphs below. Choose the correct words to fill in the blanks.

3. Read the text and answer the questions. Good luck!

To Save the Planet From Climate Catastrophe, New Study Says Put Down the Damn Meat.

“Adopting healthy and more plant-based diets globally could reduce the greenhouse gas emissions of the food system by more than half.” Amid fresh warnings from United Nations researchers that there is a closing window to enact the “rapid, far-reaching, and unprecedented” societal changes needed to prevent a climate catastrophe, a new study of the global food system underscores the environmental necessity of a massive reduction in meat consumption worldwide. Considering projections that the world’s population could grow to 10 billion by 2050, Options for Keeping the Food System Within Environmental Limits, published Wednesday in the scientific journal Nature, found that mitigating the climate crisis requires overhauling the current system by shifting toward more plant-based diets, improving technologies and management, and slashing food waste by at least half. “Feeding a world population of 10 billion is possible, but only if we change the way we eat and the way we produce food,” study co-author Johan Rockström of the Potsdam Institute for Climate Impact Research (PIK) in Germany told the Guardian.

“Greening the food sector or eating up our planet: this is what is on the menu today.”

While environmentalists and experts alike are quick to note that urgently transitioning from fossil fuels to renewable energy sources is essential to meeting the goals outlined in the Paris climate accord or more ambitious targets, this new study adds to a growing body of research that clearly shows how current meat production and consumption trends significantly contribute to the global climate crisis, particularly through greenhouse gas (GHG) emissions. According to the U.N. Food and Agriculture Organization (FAO), livestock are responsible for about 14.5 percent of anthropogenic GHG emissions. In a discussion of the study’s findings, lead author Marco Springmann of the Oxford Martin Program on the Future of Food noted that overall food production is responsible for about a quarter of all emissions—making it “a major driver of climate change.”

“Adopting healthy and more plant-based diets globally could reduce the greenhouse gas emissions of the food system by more than half.” —Marco Springmann, Oxford University

As Springmann wrote, the team of 23 researchers from across the world found that “adopting healthy and more plant-based diets globally could reduce the greenhouse gas emissions of the food system by more than half, and also reduce other environmental impacts, such as those from fertilizer application and the use of cropland and freshwater, by a tenth to a quarter.” 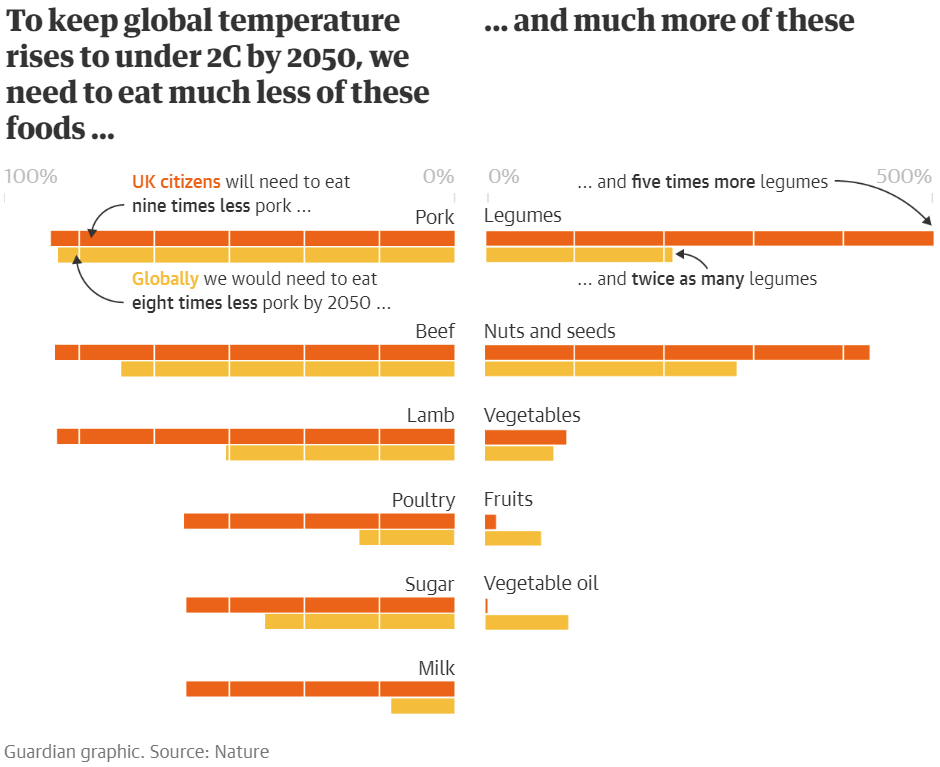