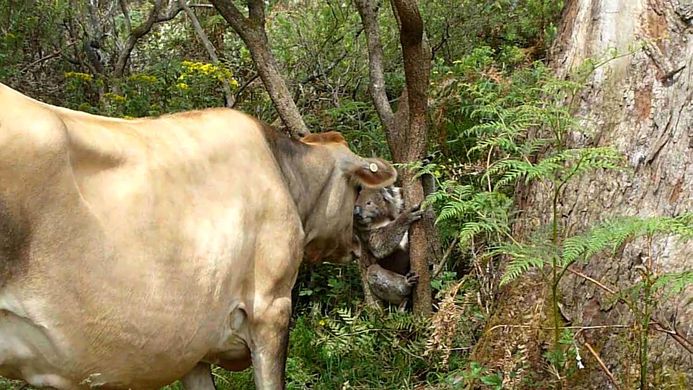 When people think of Australia, the first things that probably comes to mind is cuddly koalas and kangaroos. They probably never think of cows.

Our stereotype is very different to reality. While the koala population has plummeted to as little as 48,000 individuals in the wild, the population of cows has risen sharply to 25,000,000. That’s roughly the same as the human population. The largest cause of the koala’s decline is clear cutting of their habitats. 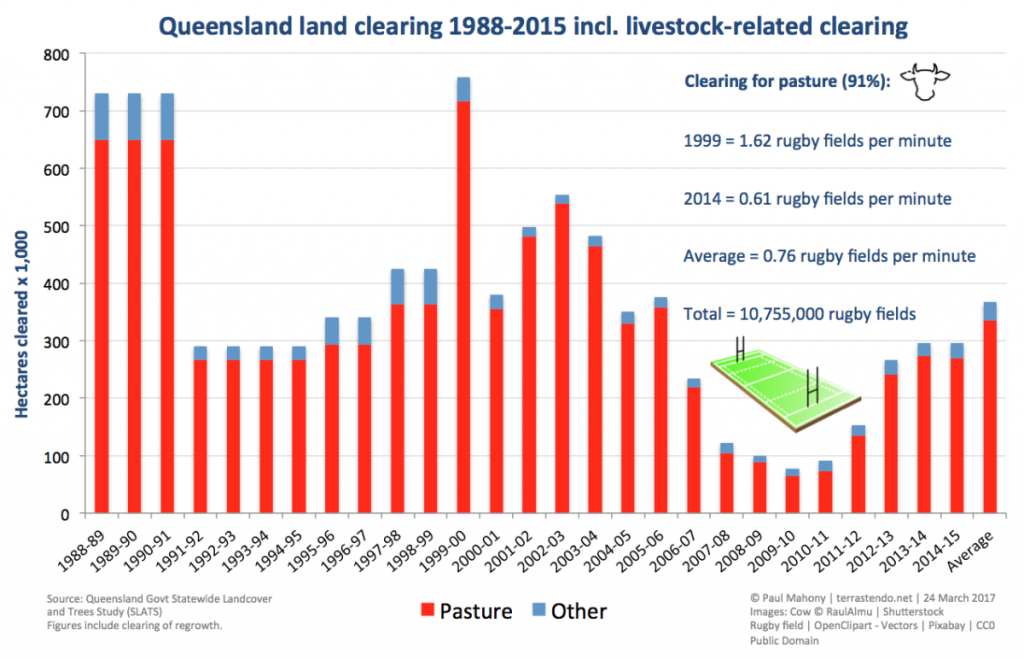 Of these 25 million cows, 11.7 million are found in the cattle capital of Australia, Queensland. There are more than double the number of cows in Queensland as there are humans. 98% of Australian cows are grass fed and whilst this is without doubt better for the cows themselves, the effect on the wild animals in Australia is immense.

In fact, the World Wildlife Fund (WWF) included eastern Australia as one of 11 deforestation hotspots worldwide. Australia is the only nation with a developed economy on this list. Between 1988 – 2015, 11 million rugby fields of forest were felled for pasture. That’s an astonishing 3/4 of a rugby field every minute. This clearing amounts to 91% of all land cleared.

Government introduced land clearing laws in 2006 and clearing slowed down, but the Liberal National Party reversed these laws in 2013 and the clearing continued full steam ahead.

In New South Wales, where there are 5 million cows, the situation isn’t much better. The Native Vegetation Act was repealed by the Conservative Liberal Party government in 2016 and clearing once again ensued.

Clearing native forests isn’t only a calamity for biodiversity. The vegetation lost and the soil underneath it contains tons of carbon that is safely sequestered. Through clearing, this carbon is emitted and it isn’t accounted for in livestock’s official greenhouse gas figures. Thus, livestock’s emissions in Australia are significantly understated. The official record is 10%, but that is using the Intergovernmental Panel on Climate Change’s (IPCC) 100 year time frame, which they themselves, have admitted is arbitrary. Due to the urgency of climate change, the effectiveness of a 100 year projection is slightly dubious. When using a 20 year time frame, the effect of methane is 5 times that of CO2, and the total becomes about 50%.

The effects don’t stop on land either. Another of Australia’s icons is the Great Barrier Reef: The world’s largest living organism. The reef has come under massive threat in recent years, and its future is in the balance.

How do cows affect the reef?

Large scale clearing causes soil to be eroded and this soil ends up in streams and rivers that feed into waters around the reef.

Queensland’s 2013 scientific statement attributed 75% of the reef’s sediment to beef production. Additionally, 54% of the phosphorus and 40% of the nitrogen can be traced back to Australia’s love affair with beef. Coral reefs, like the majority of living organisms, require sunlight for growth. When the waters around the reef are heavy with sediment, nutrients and pesticides, sunlight is blocked out. This has caused the outbreak of Crown of Thorns starfish, allowed algae to take over, and other coral diseases. 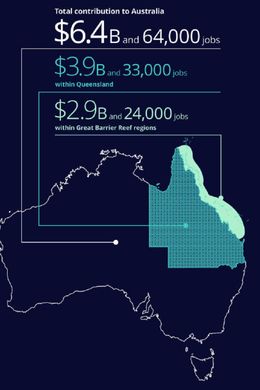 Now, you may think (perhaps accurately) that the koala population plummeting won’t negatively impact Australia’s economy. And, let’s be honest, the economy is all governments really care about these days. After all, most tourists visit koala sanctuaries to get their treasured selfies, but the Great Barrier Reef generates around $6.4 billion for the Australian economy. Surely, the future of the reef was at the top of their agenda? Not quite.

The Climate Council of Australia, which is led by Tim Flannery, visited the reef in 2016 and expressed a very worried message about the future of the reef. He didn’t, however, once mention the impact of ‘Aussie Beef’.

You might find that surprising. The fact that the head of the Climate Council of Australia failed to mention the leading cause of the reef’s dire situation is indeed puzzling. Let’s hope that his connections with Meat & Livestock Australia have nothing to do with this silence.

Surely, these links couldn’t be responsible for Tim Flannery’s speech at a forum in 2009? The forum was organized by Meat & Livestock Australia, Mr. Flannery, unbelievably, said that

“large animals like cattle and sheep were essential to restoring the health of the planet and reducing greenhouse gas levels”.

When the head of the organization entrusted with driving climate policy, clearly favors industry growth over the climate, we should all be very worried.

However, as George Monbiot pointed out:

“We like to see ourselves as free thinkers, but we all have our sacred cows.”