Exclusive: Annual consumption of plastic bottles is set to top half a trillion by 2021, far more than recycling efforts and putting the oceans, coastlines and other environments in danger.

A million plastic bottles are bought around the world every minute and the number will jump another 20% by 2021. Some campaigners believe this is as dangerous as climate change.

New figures obtained by the Guardian highlight the increase in use of plastic bottles. More than half a trillion will be sold every year by the end of the decade.

20,000 bottles are bought every second. This is driven by a desire for bottled water and the spread of a western,  “on the go” culture to China and the Asia Pacific region.

More than 480 bn plastic drinking bottles were sold in 2016 across the world, up from about 300bn a decade ago. If placed end to end, they would extend more than halfway to the sun. By 2021 this will increase to 583.3bn, according to the most up-to-date estimates from Euromonitor International’s global packaging trends report.

Most plastic bottles used for soft drinks and water are made from polyethylene terephthalate (Pet), which is highly recyclable. But as they become more popular across the globe, efforts to collect and recycle the bottles are failing. 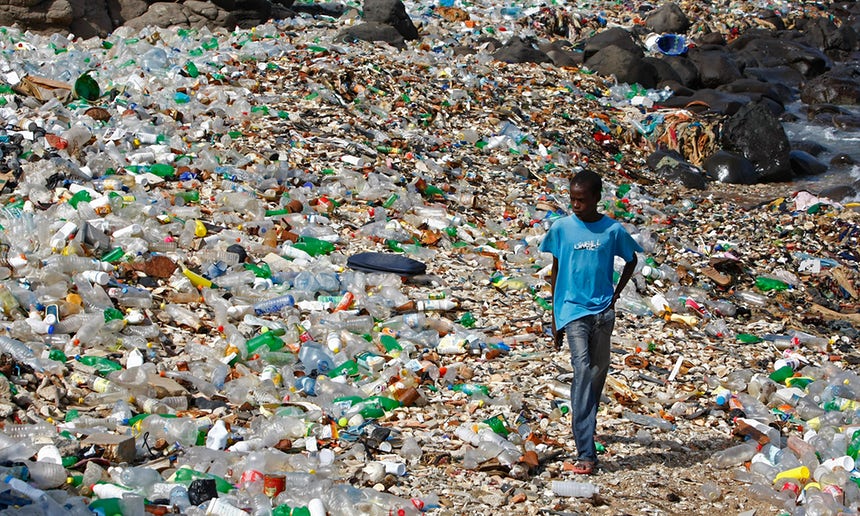 Fewer than half of the bottles bought in 2016 were collected for recycling and just 7% of those collected were turned into new bottles. Instead most plastic bottles produced end up in landfill or in the ocean.

Between 5m and 13m tonnes of plastic leaks into the world’s oceans each year. This is eaten by sea birds, fish and other organisms, and by 2050 the ocean will contain more plastic by weight than fish, according to research by the Ellen MacArthur Foundation.

Experts warn that some of it is already in the human food chain.

Scientists at Ghent University in Belgium recently calculated people who eat seafood eat up to 11,000 tiny pieces of plastic every year. Last August, the results of a study by Plymouth University reported plastic was found in a third of UK-caught fish. Last year, the European Food Safety Authority called for urgent research to stop plastic being eaten by humans.

Dame Ellen MacArthur, the round the world yachtswoman, now campaigns to promote a circular economy in which plastic bottles are reused, refilled and recycled rather than used once and thrown away.

“Shifting to a real circular economy for plastics is a massive opportunity to close the loop, save billions of dollars, and remove plastics production from fossil fuel consumption,” she said.

Hugo Tagholm, of the marine conservation and campaigning group Surfers Against Sewage, said the figures were devastating.

“The plastic pollution crisis rivals the threat of climate change as it pollutes every natural system and an increasing number of organisms on planet Earth. Current science shows that plastics cannot be usefully assimilated into the food chain. Where they are ingested they carry toxins that work their way on to our dinner plates.”

Surfers Against Sewage are campaigning for a refundable deposit scheme to  encourage reuse.

Tagholm added: “The production of throwaway plastics has grown dramatically over the last 20 years, but the systems to contain, control, reuse and recycle them just haven’t kept pace.”

In the UK 38.5m plastic bottles are used every day. Just over half are recycled,  more than 16m are put into landfill, burnt or leak into the environment and oceans each day.

“Plastic production is set to double in the next 20 years and quadruple by 2050 so the time to act is now,” said Tagholm.

There has been growing concern about the impact of plastics pollution in oceans around the world. Last month scientists found nearly 18 tonnes of plastic on one of the world’s most remote islands, in the South Pacific.

Another study of remote Arctic beaches found they were also heavily polluted with plastic. And earlier this week scientists warned that plastic bottles and other packaging are overrunning some of the UK’s most beautiful beaches and remote coastline.

The majority of plastic bottles used across the globe are for drinking water, according to Rosemary Downey, head of packaging at Euromonitor.

China is responsible for most of the increase in demand. The Chinese public’s use of bottled water is nearly a quarter of global demand, she said.

“It is a critical country to understand when examining global sales of plastic Pet bottles, and China’s requirement for plastic bottles continues to expand,” said Downey.

“This increase is caused by increased urbanisation,” said Downey. “There is a desire for healthy living and people are concerned about dirty groundwater  and the quality of tap water. This all contributes to the increase in bottle water use,” she said.

People began to use plastic in the 1940s and plastic bottles are a big part of the huge increase in use since then. Most of that plastic still exists. It takes hundreds of years to decompose.

Major drinks brands produce the greatest numbers of plastic bottles. Coca-Cola produces more than 100bn plastic bottles every year – or 3,400 a second, according to analysis carried out by Greenpeace. The top six drinks companies in the world use a combined average of just 6.6% of recycled Pet in their products, according to Greenpeace. A third have no targets to increase their use of recycled plastic and none are aiming to use 100% across their global production.

Plastic drinking bottles could be made out of 100% recycled plastic, known as RPet. Campaigners are pressing big drinks companies to increase the amount of recycled plastic in their bottles. But brands are don’t want to use RPet because they want their products in shiny, clear plastic, according to Steve Morgan, of Recoup in the UK.

The British Plastics Federation (BPF), a plastics trade body, admitted that making bottles out of 100% recycled plastic used 75% less energy than creating virgin plastic bottles. But the BPF said that brands should not be forced to increase the recycled content of bottles. “The recycled content … can be up to 100%, however this is a decision made by brands,” said Philip Law, director general of the BPF.

The industry is also against any taxes or charges to reduce demand for single-use plastic bottles – like the 5p charge on plastic bags that is credited with reducing plastic bag use by 80%.

Coca Cola said it was still considering requests from Greenpeace to publish its global plastics usage. A spokeswoman said:

“Globally, we continue to increase the use of recycled plastic in countries where it is possible. This is in around 44 countries of the more than 200 we operate in.”

She agreed plastic bottles could be made out of 100 percent recycled plastic but there was nowhere near enough high quality food grade plastic to do so.

“So if we are to increase the amount of recycled plastic in our bottles even further then a new approach is needed to create a circular economy for plastic bottles,” she said.

Greenpeace said the big six drinks companies had to do more to increase the recycled content of their plastic bottles. 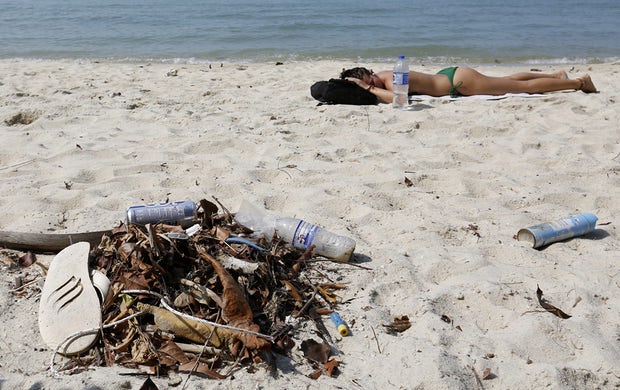 “It’s clear that the soft drinks industry needs to reduce its plastic footprint.”