.
Home » Articles » The Choice Is Ours: Extinction or Rebellion? 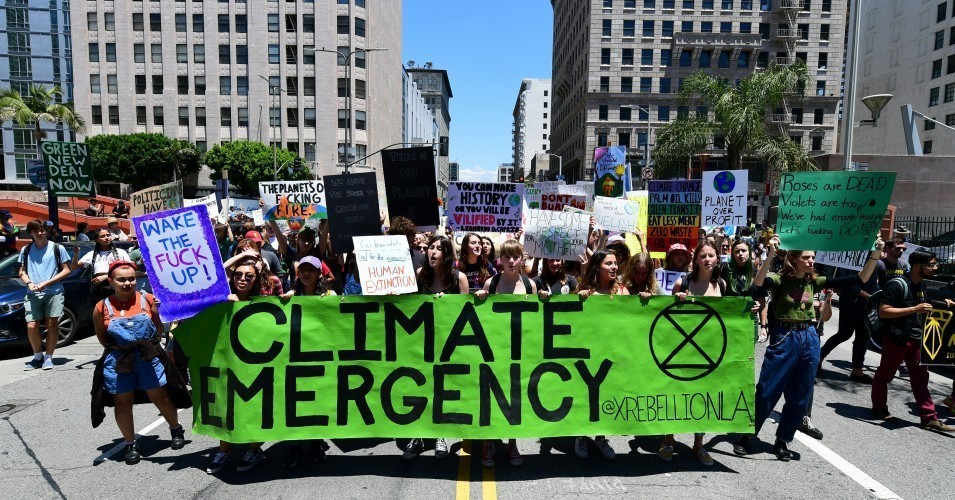 Due to capitalism’s rapaciousness, our species is hurtling towards ecocide at a frightening pace.

In the early twentieth century, tens of millions died under the Stalinist regime. We blame these deaths on the wickedness of socialism. Later, in Germany, around 6 million Jews were systematically murdered in gas chambers. We blame these deaths on the ills of fascism. At the other end of the Eurasian continent, around 22 – 45 million died under Chairman Mao between 1958-1962. These deaths are blamed on the evils of socialism. Further south, Pol Pot was responsible for the deaths of between 13 percent and 30 percent of the population. The deaths of up to 2.8 million people in Cambodia’s Killing Fields were attributed to the peril of communism.

In 2019, a staggering 795 million people, or one in nine of us, does not have enough food to lead a healthy active life. By 2025, around 1.8 billion people will live in areas plagued by water scarcity, and two thirds of the world’s population will be living in water-stressed regions. If there is no water, then there will be no food.

While the future famines will be caused by a lack of water, the malnourishment we see today isn’t the result of a lack of food on our planet. In fact, there are now more people suffering from obesity than those that are malnourished. The problem stems from our current system of capitalism. Why do we not call capitalism out for all this suffering as we do with socialism, communism or fascism?

These companies and the humans that lead them are complicit in nothing short of the manslaughter of millions, the destruction of the ecosystems we rely on for our survival, and the extinction of up to 10,000 species a year.

This is why today, people in wealthy countries can spend their days in comfort, chowing down on steaks, whiling their time away playing video games and watching endless TV series and movies, and then go on to talk about these video games and TV shows in an endless loop of nothingness. All while people with the mere misfortune to be born in a different geographical space in time are trying their best to survive in harsh conditions we in the global north car barely imagine. We have more money and more money equals the right to use more resources. We can enjoy ourselves at the expense of the poor.

Due to capitalism’s rapaciousness, our species is hurtling towards ecocide at a frightening pace. All of us in the global north are to blame, some more than others. The fossil fuel companies that have lied to us for decades to keep us hooked on their products, the large conglomerates profiting from the destruction of entire ecosystems to keep us hooked on the flesh of animals even as we are awakening to the fact that plant based diets are healthier and more sustainable, the agrochemical corporations that enrich themselves and their shareholders by forcing farmers to use their chemicals on the food we eat which in turn makes us sick and decimates insect populations and contaminates our soil and kills our earth worms, the car companies that lie about emissions and lobby our elected leaders so we buy more of their products are largely responsible for our current predicament.  These companies and the humans that lead them are complicit in nothing short of the manslaughter of millions, the destruction of the ecosystems we rely on for our survival, and the extinction of up to 10,000 species a year. They will also be responsible for the mass starvation of billions of humans in just a decade or so. This is the work of the greed that capitalism encourages and desires in us. Capitalism only survives by us buying more and more things so investors receive returns. The GDP must keep going up and up and up forever or the system collapses. But we all know this is not possible. We have extremely limited resources, and for the GDP to keep rising, we need more and more people. We cannot continue to expand our population in perpetuity. The system was flawed at the outset, and its flaws have never been more apparent than now as we start to see our life systems unravel before our very eyes.

The capitalists and our corrupt governments are largely to blame for this destruction and the extinctions. They will also be to blame for the deaths as food and water runs dry. They were told by scientists that this would happen if they didn’t change course, but they continued anyway to keep the system going, and they ignore the reality of our distress as they fly around in private jets and moor their yachts off shore in the same place they hide their wealth.

Every day that goes by that we continue to feed 70 billion farmed animals in factory hell holes while almost a billion humans go hungry. Every day we stay silent as ecosystems collapse, we are complicit in the manslaughter of the global south.

If we must blame historical deaths on socialism, communism or fascism, then let’s be honest with ourselves and blame capitalism for ecosystem collapse, extinctions and mass starvation. But, let’s not forget that as we stay silent and act like children, while children act like adults, that we too are to blame.

It doesn’t have to be this way. We have options open to us, but time is running out. Will you play video games and watch TV shows tonight, or will you awaken from this drunken stupor and rise up with humanity to demand a just transition to a fairer and more equal system that encourages love not fear and bridges not walls.

Do you want Extinction or Rebellion?

Opinion | The Choice Is Ours: Extinction or Rebellion?

Due to capitalism’s rapaciousness, our species is hurtling towards ecocide at a frightening pace.