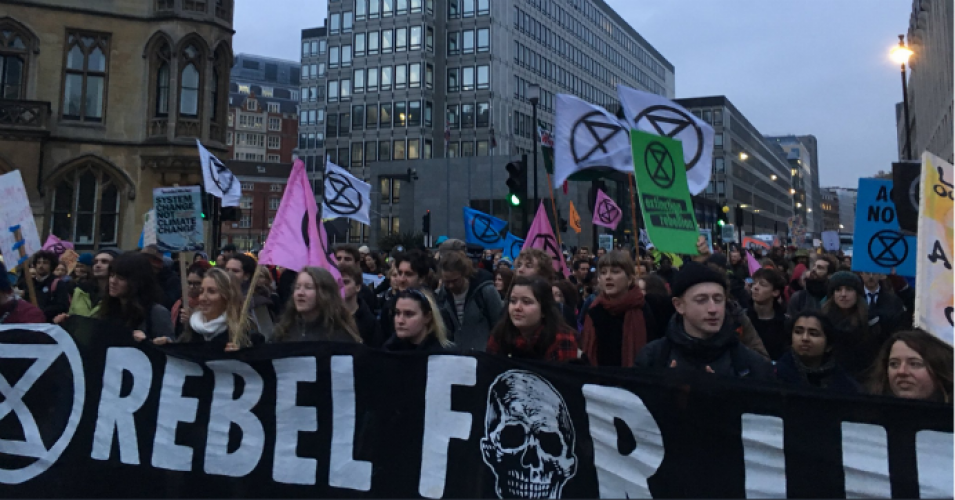 “The climate crisis is worsening much faster than previously predicted. This desperate situation can’t continue.”

After starting in the United Kingdom just months ago with a mere 10 members dedicated to pressuring their elected officials to urgently confront the climate crisis, the Extinction Rebellion has quickly ballooned into a global movement spanning an estimated 35 countries—a testament to the growing disaffection with the deadly climate status quo and hunger for transformative change among the world’s population. “In the two months since our first action, we have expanded more than we imagined,” Liam Geary Baulch, a U.K.-based Extinction Rebellion activist, told The Guardian. “We are now planning to change our structure so it can accommodate up to two million people.” In a sign of the movement’s rapid spread beyond the streets of London, Extinction Rebellion banners have been seen over the past several days at rallies in Katowice, Poland, the site of the ongoing COP24 climate conference. According to the movement’s principal organizers, the goal is to build up to a massive international day of action next April.

We are at the #COP24 climate talks, building global alliances in preparation for International #Rebellionweek – a global uprising that will begin 15th April 2019 We were so grateful to be invited to speak from the platform at the Climate March yesterday. #ExtinctionRebellion pic.twitter.com/Qxvk5OlZqV

Further evidence of the movement’s growing size and reach came in the form of an open letter signed by journalist Naomi Klein, academic and renowned dissident Noam Chomsky, and around 100 other prominent international progressives calling on “concerned global citizens to rise up” and join the Extinction Rebellion. “We must collectively do whatever’s necessary non-violently, to persuade politicians and business leaders to relinquish their complacency and denial,” reads the letter, which appeared in major newspapers across the globe. “Their ‘business as usual’ is no longer an option. Global citizens will no longer put up with this failure of our planetary duty.” Read the full letter:

In our complex, interdependent global ecosystem, life is dying, with species extinction accelerating. The climate crisis is worsening much faster than previously predicted. Every single day 200 species are becoming extinct. This desperate situation can’t continue. Political leaders worldwide are failing to address the environmental crisis. If global corporate capitalism continues to drive the international economy, global catastrophe is inevitable. Complacency and inaction in Britain, the USA, Australia, Brazil, across Africa and Asia all illustrate diverse manifestations of political paralysis, abdicating humankind’s grave responsibility for planetary stewardship. International political organizations and national governments must foreground the climate-emergency issue immediately, urgently drawing up comprehensive policies to address it. Conventionally privileged nations must voluntarily fund comprehensive environment-protection policies in impoverished nations, to compensate the latter for foregoing unsustainable economic growth, and paying recompense for the planet-plundering imperialism of materially privileged nations. With extreme weather already hitting food production, we demand that governments act now to avoid any risk of hunger, with emergency investment in agro-ecological extreme-weather-resistant food production. We also call for an urgent summit on saving the Arctic icecap, to slow weather disruption of our harvests. We further call on concerned global citizens to rise up and organize against current complacency in their particular contexts, including indigenous people’s rights advocacy, decolonization and reparatory justice – so joining the global movement that’s now rebelling against extinction (e.g. ‘Extinction Rebellion’ in the UK). We must collectively do whatever’s necessary non-violently, to persuade politicians and business leaders to relinquish their complacency and denial. Their “business as usual” is no longer an option. Global citizens will no longer put up with this failure of our planetary duty. Every one of us, especially in the materially privileged world, must commit to accepting the need to live more lightly, consume far less, and to not only uphold human rights but also our stewardship responsibilities to the planet.