We can feed an extra 4 billion people a year if we reject the bloated and wasteful factory farming systems that are endangering our planet’s biodiversity and wildlife, said farming campaigner Philip Lymbery on Monday night, launching a global campaign to Stop the Machine.

At present, 35% of the world’s cereal harvest and most of its soya meal is fed to industrially reared animals rather than directly to humans.

This is a “wasteful and inefficient practice” because the grain-fed animals contribute much less back in the form of milk, eggs and meat than they consume, according to Lymbery, the chief executive of Compassion in World Farming (CIWF). “The food industry seems to have been hijacked by the animal feed industry,” he said. 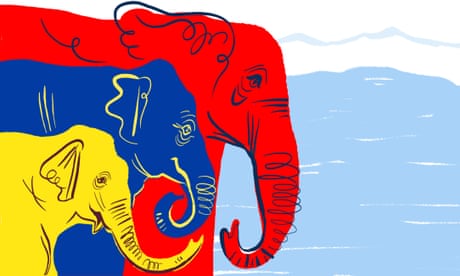 ‘What can I do to help elephants?’

In recent years the developing world in particular has seen significant agricultural expansion. According to independent organisation Land Matrix, 40m hectares have been acquired globally for agricultural purposes in the last decade and a half, with nearly half of those acquisitions taking place in Africa.

The impact of that expansion is still unclear, but meanwhile the world’s wildlife has halved in the past 40 years. “Ten thousand years ago humans and our livestock accounted for about 0.1% of the world’s large vertebrates,” said Tony Juniper, the former head of Friends of the Earth. “Now we make up about 96%. This is a timely and necessary debate, and an issue that is being debated more and more.”

An exhibition at the Natural History Museum by the campaigners aims to draw explicit links between industrial farming and its impact on wildife. The Sumatran elephant, for example, has been disastrously affected by the growing palm oil industry, with more than half of its habitat destroyed to create plantations, and elephant numbers falling rapidly.

The old argument that we need factory farming if we are to feed the world doesn’t hold true, says Lymbery, who argues that ending the wasteful practice of feeding grain to animals would feed an extra 4 billion people. Putting cattle onto pasture and keeping poultry and pigs outside where they can forage, and supplementing that with waste food is far more efficient and healthy, he says. According to his calculations, based on figures from the UN’s Food and Agriculture Organisation (FAO), the total crop harvest for 2014 provided enough calories to feed more than 15 billion people (the world’s population is currently 7.5 billion), but waste and the animal feed industry means that much of that is going elsewhere.

However, some agricultural sectors disagree. A spokesman for the UK’s National Farmer’s Union said: “The majority of the UK’s livestock take advantage of our capacity to grow grass in this country and graze outside, helping to produce the great British food the public enjoy. The use of grain by farmers is one part of a diverse range of feed options for animals. The grain used on farms is an effective and sustainable way to use products that would otherwise be wasted, as it does not reach the standard for human consumption.”

Last week, two health researchers persuaded more than 200 scientists and policy experts to sign a letter asking the incoming head of the World Health Organisation to recognise that factory farming poses a major threat both to humans and to our environment. Arguing that “practices such as the indiscriminate use of antibiotics, close confinement of animals and unsustainably large scale of production have become the industry standard, and each has grave consequences for human health,” the letter was signed by experts including Owen Barder, Mark Bittman and Laurie Garrett, and received widespread social media attention as well as featuring in the New York Times as an editorial. 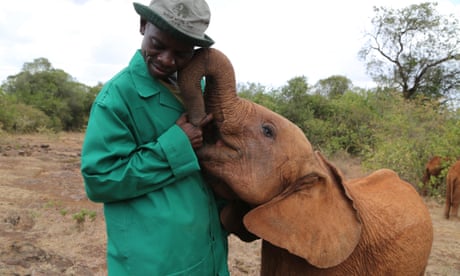 “There is definitely wider interest in this subject,” veteran farming campaign Peter Stevenson told the Guardian. “The UN’s special rapporteurs on food, Hilal Elver and her predecessor Oliver de Schutters, have been extremely outspoken and the FAO has done some fascinating studies in this area. But when you go and talk to the European commission or bodies here in the UK there is almost absolute refusal to recognise that there is anything questionable about our current farming practice.”

In October CIWF and WWF will host a joint conference on the subject of extinction and livestock.

“The Natural History Museum is the right place to have this exhibition because factory farming belongs in a museum,” said Lymbery.

One thought on “Calls to reform food system: ‘Factory farming belongs in a museum’”